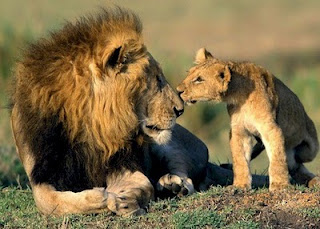 by Andrew Latham
Animals might not have a "proper" language in which to communicate, but communicate they do and in an amazing variety of ways.
Top 5, Ants.
How do you organize a collective society of thousands of members without being able to say a word? Ants have found the answer in chemical communication. Ants have from 10 to 20 chemicals in different glands of their bodies depending on the species. Depending on the chemical released ants can signal alarm, invite friends to eat from a new food source or even organize military tactics when attacking an enemy, to mention a few of the 50 standard behavior patterns that have been observed by zoologists.
One of the most curious examples of ant's chemical communication is how they recognize dead ants when they sense the oleic acid that is released when an ant's body starts to decompose. A scientist with a dark sense of humor experimented with this method of communication by dropping a spot of oleic acid on a live ant. The other ants dutifully carted away the "dead" ant, screaming and kicking, to the cemetery outside the nest and continued to do so no matter how many times the poor "undead" ant walked back.
Top 4, Elephants
Elephants communicate a wide range of emotions using "elephant talk" by a combination of sound and body language signals that range from low frequency rumblings to high frequency trumpets, roars, bellows, barks and snorts. Interestingly many of the sounds in "elephant talk" are well below the level of human hearing but are so powerful elephants can hear them from several miles away.
Elephant communication is so complex; it is difficult for researchers what to make of it. Joyce Poole is a researcher that has dedicated over 20 years to the study of "elephant talk" has witnessed greetings between elephants that have been separated for a long time that included rushing together with their heads high up while flapping their ears and even putting their trunk into one another's mouth in a way of communicating the joy of meeting after a long time. Such communication and displays of affection strengthen the social networks between elephants.
Top 3, Bees
The search for food is always at the top of conversation subjects in animals and humans alike and bees are no exception. Searching for food is serious business for bees and finding it is a complicated ritual. Once food is found it is important to communicate the exact location to the rest of the hive. This is done by an amazing form of communication based on a series of dancelike movements that inform the hive of the quality and location of the food.
How do the bees communicate this vital information? The location of the food source is indicated by the rhythm of the dance and by the orientation of the axis of the tail with respect to gravity. If the food source is near the hive, a "round" dance is performed. A "tail-wagging" dance indicates that the food source is more than 80 meters (260 feet) away. This dance transmits precise information about direction as well as distance. The number of dance cycles performed by the bee in a certain length of time is inversely related to the distance of the food source. Thus, about 10 cycles are performed every 15 seconds for a food source 100 meters (330 feet) away, but only one cycle is made in that period if the food source is 10,000 meters (33,000 feet) away.
Top 2, Lions
Although lions are not renowned for their small talk skills research has shown that they are excellent communicators. A male's mighty roar is an obvious warning that can even freeze a prey or a male rival in its tracks. But lions are not all about killing, they are social cats, they will also roar just to keep in touch with the other members of the pride. This type of roar is softer and less assertive. One researcher reported a lion that was heard roaring every 15 minutes until his cousin answered. The chit chat continued for over 15 minutes until they finally met up to hang out, after which the roaring stopped.
Top 1, Plants talking to Animals
I know, plants are not animals but they still deserve Top 1. You will not believe how some plants display amazing skills communication with other plants and even animals in order to save their necks, or should I say stalks.
Lima bean plants, for instance, will release a chemical distress signal when attacked by spider mites that attracts other mites that enjoy feeding on spider mites.
Similarly, corn, tobacco and cotton plants when invaded by caterpillars will segregate airborne chemicals that attract wasps, a sworn enemy of caterpillars. This form of communication is not just a case of saying I am hurt, or hungry, or where to find food, it is a fabulously complex system that allows plants to call for the right type of help when needed and even warn other plants. For example, willow, poplar, alder and birch trees when attacked by caterpillars, fungus or powdery mildew will send out chemicals to jump start the defense systems of other undamaged plants.
Learn more from Andrew Latham at website http://ezinearticles.com/?expert=Andrew_Latham#more-information
Posted by Michelle Buckalew at 7:42 AM