By Darlene Norris
Are you frustrated and worried about the cat urinary problems your furball is having? Is a recurring cat bladder infection becoming a serious issue?
Here are five simple ways you can help promote good cat urinary health for your feline friend.
Keeping Your Cat Healthy From The Inside Out
An excellent diet is the foundation of any health program. Most cat owners want the best for their kitties, so you should do your own research if you want to keep your cat healthy.Ever wonder why cats don't seem to drink much water? It's because they're meant to get most of their water from their food. A cat in the wild eats mice and other prey animals.
Since a mouse is over 90% water, our wild feline friend has already satisfied most of his water requirements. When we take a cat out of his natural environment and feed him a low-moisture diet of dry food, we're heading for disaster in the form of cat bladder infection. High-quality canned food has a moisture level of around 75%, which is much closer to a natural diet.
Plenty Of Water Is Essential For Good Cat Urinary Health
Even if you're feeding a canned food, it's still essential to make sure your kitty has access to plenty of fresh, clean water. It's a proven fact that the best way to prevent cat urinary problems is to keep the water going through your cat. This prevents his urine from becoming too concentrated, and flushes out toxins that can lead to cat bladder stones.
Control Cat Stress
Cat stress has been linked to feline idiopathic cystitis, which is a bladder inflammation that doesn't seem to have a cause. This condition is becoming more common in cats, and is considered to be a modern problem. Sources of stress include moving to a new home, adding a new pet or person to the household, seeing a strange animal outside, being bothered by another pet in the home, and just being an inside cat. It's very important to be on the look-out for anything that could be stressing your cat.
Exercise Is Important
We often neglect exercise for ourselves, not to mention our pets. But exercise is very important for optimum health. Not only is it good for your cat physically, but it's important mentally, as well. If your cat is bored, he's more likely to be a victim of cat stress.Provide your cat with toys to play with, and make sure you get him running around the house and out of breath at least twice a day.
Natural Feline Urinary Support Is Important
There are many natural remedies for pets on the market these days. It can be very difficult to choose the best one for your cat. Here are a few tips:
You'll want to be sure the remedy is formulated especially for pets. Some herbs are not safe for pets, or the dosage may be too high for a small animal. When you purchase a remedy made especially for pets, you'll be confident in its safety. A second requirement is that the company has been in business for many years, and has the highest reputation for producing the best-quality pet remedies. Look past the hype to find a company with years of experience in this field. The remedy needs to be easy to administer. You won't use it for long if you have to fight with your cat all the time to get it into him.
Preventing cat urinary problems is easier than treating them. Now it's time to promote cat urinary health by putting these steps into action.
Darlene Norris has combined her long-time interest in natural healing with her experience working at a vet clinic to bring you her new website, Natural Pet Urinary Health. Learn more about cat urinary health, and find the best place to buy herbal pet remedies at http://naturalpeturinaryhealth.com/
Posted by Michelle Buckalew at 12:44 PM 1 comment: 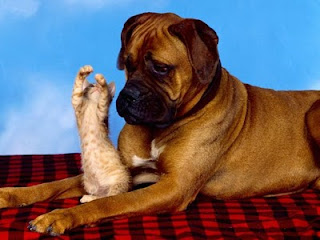 Animal World USA is pleased to announce that Governor Robert Bentley has officially proclaimed 2nd Alabama Week for the Animals March 5-13, 2011. The special governor-proclaimed week will highlight the importance that animals play in our lives and bring communities together on behalf of the animals throughout the great state of Alabama.
This statewide event is designed to celebrate and build awareness on behalf of all animals, as well as recognize the organizations and citizens who support them. The special week is once again bringing together educators, advocates, animal shelters, rescue organizations, sanctuaries, businesses, students, musicians, artists, community leaders, and caring citizens in an exciting week of community-building activities.
The exciting week will feature pet adoption festivals, low cost spay neuter events, feral cat initiatives, wildlife activities, educational events and a variety of life-saving community events statewide. All these events will shine the spotlight on the amazing animals, beauty and compassionate people of Alabama.
The week presents a unique opportunity to change the history for the animals by collectively coming together through goodwill. Precious lives which will be saved and communities will be transformed during this week through a wide variety of animal-related events and activities.
If you would like to learn more, please call 877-454-0807 or visit the official website. www.alabamaanimals.org/
You may also learn more about the AWUSA Weeks campaign at http://www.animalworldusa.org/
Posted by Michelle Buckalew at 11:48 AM 1 comment: 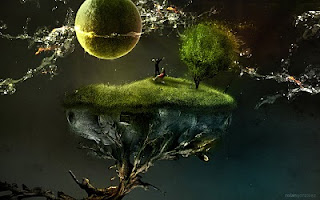 Theoretical physics is catching up with science fiction—making the possibility of more ethically-advanced extra-dimensional worlds plausible.

Have you ever wondered whether there might be another you wandering around somewhere, perhaps on a planet much like our own but subtly or even drastically different? If so, then you may have actually created such a person in another reality simply by thinking about it!

Sound farfetched? Well, Dr. Brian Greene doesn't think so. As a bestselling author and physics professor at Columbia University, he's done the math, and says it suggests that our universe may be merely one of a potentially infinite number that exists within an ever-expanding multiverse. Of course, we can't see or visit these alternate domains (just yet, anyway) because, according to string theory, reality vibrates on at least ten or eleven mathematically-identifiable dimensions, and we Earthlings only experience three spatial dimensions (plus one of time).

Nevertheless, Professor Greene believes scientists could perhaps prove the existence of parallel universes by formulating a unifying Theory of Everything that resolves basic inconsistencies between Einsteinian relativity and quantum mechanics (thereby solving the great mystery of why matter behaves so differently on the macro and microcosmic levels).

If parallel universes were discovered, it would radically revolutionize how we understand the very nature of reality. Readers wanting a comprehensive but accessible explanation of these heady ideas should check out Dr. Greene's new book, The Hidden Reality: Parallel Universes and the Deep Laws of the Cosmos. However, what interests me most at the moment is not the nitty-gritty numbers behind string theory, but rather imagining what kinds of worlds may exist out there beyond our current ken. And, especially because Professor Greene is a vegan who stopped eating meat as a nine year old to avoid eradicating animals' existence, my mind is led to consider a grand possibility: that somewhere, on some other plane of reality, there are worlds where people don't kill animals for food or any other unnecessary reason.

Perhaps a good place to begin such a conceptual journey is with an example of a parallel universe from pop culture—specifically the classic 1967 Star Trek episode “Mirror, Mirror”* in which a malfunctioning transporter beams Captain Kirk and three Federation starship officers into an alternate world (with their doubles simultaneously materializing on the Enterprise). In this strange reality, the intrepid interstellar space explorers boldly encounter their crewmates' evil counterparts—including a stylishly goateed Mr. Spock who is still eminently logical but trapped in an irrationally cruel and ruthless reality of imperial intrigue, genocide and assassinations. Like all Vulcans, Spock (the original at least) is a pointy-eared alien who espouses non-violence and practices ethical veganism.

Meanwhile, in our reality, Leonard Nimoy, the actor who personifies the hyper-intelligent and super-strong Science Officer, is a vegetarian—probably because he was convinced by the philosophy of the fictional character he portrayed to stop eating meat, showing how even “parallel” made-up people can have tangible effects on our world.

If Spock's malevolent doppelganger is any indication of the potential differences between our universe and others populating the multiverse, then it is quite conceivable that perhaps, somewhere among the infinite possible realms, PETA president Ingrid Newkirk is CEO of McDonalds, for example, or there’s a world where sentient plant beings breed humans on factory farms for meat. Conversely, there may also be worlds where avid hunting enthusiast Ted Nugent runs a sanctuary for injured wildlife, carnivorous chef Anthony Bourdain copacetically hosts a popular vegan cooking show called Kitchen Compassion, or there’s a smartphone app that translates most known species’ languages into human speech and vice versa. Statistically and probabilistically speaking, the variegated details between alternate worlds are essentially limitless.

While we are all stuck living in just one reality (for the time being, at least), in another sense animal rights advocates already live in a parallel universe ruled by a paradigm of brute force domination over other species. That is, we exist, individually and collectively, as a universe within a universe—right alongside a vast majority of people who either don't know or don't care, for instance, that the meat they eat is actually the dead flesh of animals who were tortured on factory farms before being painfully slaughtered on mechanized assembly lines.

We see the cruelty that others remain blind to, the horror hidden in plain sight, and feel empathy for the conscious creatures who so clearly share our inherent will to live and love. And as we strive to create a kinder, gentler world, one in which innocent animals aren't victimized for pleasure and profit, perchance our thoughts and actions in this reality are not only making a difference for animals here on our planet, but also creating divergent worlds throughout the multiverse where animal exploitation is universally condemned or utterly unthinkable.

What do you think other universes might be like? Express your creative visions in the “comments” section!

* Watch the full Star Trek episode "Mirror, Mirror" online for free at cbs.com.
Posted by Michelle Buckalew at 8:18 AM 2 comments: