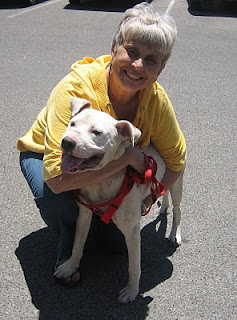 A summer of broken hearts leads to a spring of renewed spirit.

In August 2009 the collective hearts of New Mexico’s “animal community” broke as we said goodbye to Salvador, the beloved yellow pit bull and resident of Kindred Spirits Animal Sanctuary.

Salvador left a legacy of love for all who were lucky enough to know him. While saddened to learn that this wonderful creature had crossed the Rainbow Bridge, visions of his magnificent smile linger, while lessons of forgiveness remain deeply ingrained in our souls.

Salvador arrived at Kindred Sprits by way of The Santa Fe Humane Society; his severe injuries were consistent with those of a bait dog used in fighting.

Love, patience and the ability to “know” he was safe restored Salvador’s spirit.

One cannot help but reflect upon the memory of Salvador’s noble character when meeting Trooper—it is impossible not to draw a parallel about the forgiving nature of the dog.

Named for his incredible will to live and persevere, now it’s Trooper’s time to teach. His sweet temperament allows us to marvel at the depth of the canine spirit once again.

Found wandering in Valencia County on June 4, 2010, Trooper’s face was swollen beyond recognition. Blood and ticks had gathered in such dense proportion it was difficult for authorities to tell what breed he was.

Trooper’s wounds suggest that he too was used as a bait dog for fighting. Evidence reveals that Trooper’s mouth had been wired shut (a tactic used by dog-fighters) to prevent him from retaliating against aggressive attackers.

Veterinarians state that Trooper’s collar had become embedded in his neck (a result of being on the dog for too long). A deep gash and pools of blood indicate the collar was ripped off the dog before his rescue.

Lynne Vito of Jemez Springs Animal Amigos states,“ When found, the dog’s ribs bulged through his body from lack of food and he was covered with ticks.”

Patty Mugan, Animal Control Technician for Valencia County found Trooper a wonderful foster home with Claire Leonard where he could mend while awaiting permanent placement. This serendipitous occurrence provides another link between the two dogs. Leonard (a volunteer for Kindred Spirits) knows first hand about the recuperative power of love as well as the resilient nature of the dog.

As part of her duties at Kindred Spirits she personally cared for Salvador. Leonard was very happy to report that Trooper is thriving under her care. Incredulous, she states that Trooper shows no bitterness towards people or other animals. “He is simply happy; he loves playing with toys and has not stopped wagging his tail.”

They say, “time heals all wounds” and this adage proves true with regard to Trooper’s physical injuries. But once again it is the dog’s uncanny ability to forgive that transcends time— and above all— human comprehension.

Animal Protection of New Mexico (APNM) is offering up to $5000 as a reward for information leading to the arrest of Trooper’s abusers.