Swiss Attorney Lends his Voice to the Animals 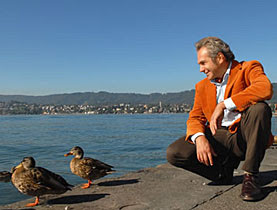 Antoine Goetschel's job as animal welfare attorney in Zurich is not only unique in Switzerland – it's also a worldwide first. Zurich's pioneering work in this area could soon be adopted by other cantons. Goetschel tells swissinfo how Switzerland is among the most progressive countries when it comes to protecting our feathered and furry friends.

Working for the canton of Zurich, the lawyer acts in court cases and in criminal proceedings on behalf of abused animals. Discussions have recently been held by parliamentarians about introducing the Zurich idea into federal legislation.

Goetschel, a vegetarian, has held the part-time post since November 2007.

He is also one of the founders of the Zurich-based Foundation for the Animal in the Law, which has the largest public library of texts on animal welfare law and animal ethics in the German-speaking world.

swissinfo: What does the work of an animal welfare attorney involve?
Antoine Goetschel: I have about 150-180 cases per year. I'm informed from the start of the investigation into the case and I can see whether special exams, proofs and witnesses have been made or asked. If not, I can influence this procedure. When the case comes to court or to a decision I can suggest the punishment by comparing it with other cases.

As the animal welfare attorney, and in collaboration with the Foundation for the Animal in the Law, I have access to information on every court case and every criminal case decision concerning animal welfare and ethics in Switzerland.

This allows me to say a case looks similar to another one and there, the punishment was SFr800 ($715). This is a more serious case, so the punishment should not be under SFr2,000.

Working on this with a warm heart, but not showing too many emotions, we cooperate very well with state attorneys, the courts, police and other offices and I feel we are accepted as experts in the field.

swissinfo: Can you describe a typical case?
A.G.: Overall, 60-70 per cent of cases are of mistreated dogs - dog abuse cases are quite common, not always by the owners but also by third parties. I also have a case where a person was seen mistreating horses. We had four witnesses but the state attorney at first didn't want to listen to the witnesses because he thought the case was not proven. We won an opening of the investigation in court and these witnesses have now been questioned and the person has gone to court.

swissinfo: There are discussions about having animal welfare attorneys across the whole of Switzerland, but the government is not so keen. Why?
A.G.: The government is protecting the cantons which are each responsible for their own application of animal welfare legislation. So it is not being visionary at the moment. But there is some support in parliament and the move could still be implemented in Switzerland within the next few years.

swissinfo: Would you nevertheless describe Switzerland as being at the forefront of animal welfare legislation?
A.G.: It depends what you compare. We have just changed our animal welfare legislation and this could be said to be among the leading laws in Europe, with Germany and Austria and the Netherlands. We have changed the legal status of animals in Switzerland, as has also been done in Germany and Austria, and a bit in France.

swissinfo: You have been researching the situation in other countries for a publication.
A.G.: We compared 18 legislations worldwide from Argentina, Japan and China to Britain, asking the same 18 questions. The goal is to motivate politicians and legislators interested in animal welfare in one country to adopt a good legislation from another country.

For example, it could be interesting for Britain to have animal welfare lawyers because it is where animal welfare legislation started in 1824 and it gives the impression of being very animal friendly.

swissinfo: Are the Swiss a nation of animal lovers?
A.G.: Looking back into Germanic history, before the 1930s and especially in the Middle Ages, people had a closer relationship to animals so it is not astonishing that Germany, Switzerland and Austria are progressive here and are pushing European legislation forward.

Through this Switzerland is becoming increasingly known as animal welfare friendly. I had the honour of helping change the Swiss constitution in 1992. Switzerland is now the only place worldwide which protects animals' dignity both in the constitution and in legislation. It encourages other states to look at Swiss solutions more closely.

swissinfo: What was your motivation for becoming involved in animal welfare?
A.G.: It started in 1986 quite by chance when I was asked to write on its legal aspects. I realised the importance of animal ethics as far as animal experiments were concerned, for vegetarianism, farm animals and so on.

During this time I was not allowed to speak for ten days because of an operation. For me it was deep personal experience, this deprivation of expression, because I like talking a lot! I felt solidarity to especially farm animals which are not able to express themselves and I looked at animal welfare with new eyes.

swissinfo: Animals are for you...?
A.G.: Animals for me have a soul and intelligence that is not being seen appropriately by human beings and are a special life form, just as humans are. For me it's a question of solidarity to protect their interests, lives and wellbeing just as it is important to protect the environment, abused children and so on.

He has also stated since taking on this role that the biggest challenges he faces are hard hearted judges and state attorneys, stubborn farmers, selfish pet owners. And politicians that lack vision.

I had the very great pleasure of hearing Antoine speak in Barcelona a few years ago.. He is doing wonderful work - but I think he should be described as a vegan, rather than a vegetarian perhaps?