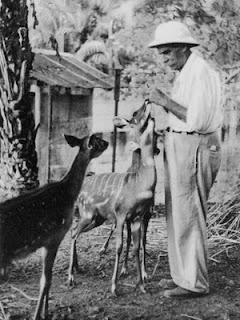 Born on January 14, 1875 in a country village in Alsace (then part of Germany; later part of France), Albert Schweitzer was the son of a Lutheran pastor. Albert Schweitzer (1875-1965) was an accomplished theologian, musicologist, organ technician, physician and surgeon, missionary, philosopher of ethics, lecturer, writer and the builder and chief force of the famous hospital at Lambarene, in Gabon, the former French Equatorial Africa.

He was awarded the Nobel Peace Prize in 1952. He is known for his compassion and respect for animals. During his life he stated, “We need a boundless ethic which will include the animals also. The ethics of respect for life makes us keep on the lookout together for opportunities of bringing some sort of help to animals, to make up for the great miseries men inflict on them.”

In 1949 Albert visited the United States and in 1952 he received the Nobel Peace Prize to add to such other recognitions as the Goethe prize of Frankfurt and numerous honorary doctorates awarded by many universities.

Another reflection from Schweitzer, "The time will come when public opinion will no longer tolerate amusements based on the mistreatment and killing of animals. The time will come, but when? When will we reach the point that hunting, the pleasure in killing animals for sport, will be regarded as a mental aberration?"

The monies associated with the Nobel Prize were expended towards the accomodation of persons afflicted with leprosy at Lambaréné.

There is a hospital in Haiti named after this incredible man: Hôpital Albert Schweitzer in Deschapelles, Haiti. Hospital Albert Schweitzer Haiti, founded by Larry Mellon and Gwen Grant Mellon in 1956, is an integrated rural health system that provides medical care and community health and development programs for 300,000 impoverished people in the Artibonite Valley of central Haiti. Larry Mellon was inspired by the life and philosophy of Albert Schweitzer to dedicate his life to the creation of this hospital.The hospital is located in Deschapelles. Email hopitalas@hashaiti.org Also visit http://www.friendsofhas.org/

There is also the Albert Schweitzer Hospital in Lambaréné, now in Gabon, west central Africa (then French Equatorial Africa.)

Schweitzer said, "As long as I can remember, I have suffered because of the great misery I saw in the world. I never really knew the artless, youthful joy of living, and I believe that many children feel this way, even when outwardly they seem to be wholly happy and without a single care.I used to suffer particularly because the poor animals must endure so much pain and want. The sight of an old, limping horse being dragged along by one man while another man struck him with a stick -- he was being driven to the Colmar slaughterhouse -- haunted me for weeks."

Albert Schweitzer wrote the following prayer for the animals he so loved:

Hear our humble prayer, O God, for our friends, the animals. Especially for animals who are suffering: for any that are hunted or lost or deserted or frightened or hungry; for all that must be put to death. We entreat for them all thy mercy and pity, and for those who deal with them, we ask a heart of compassion and gentle hands and kindly words. Make us, ourselves, to be true friends to animals and so to share the blessings of the merciful.

Thanks for this post! In addition to the two hospitals you mentioned, The Albert Schweitzer Fellowship (www.schweitzerfellowship.org) promotes Dr. Schweitzer's legacy in the U.S. -- supporting over 200 graduate students each year in developing and implementing 200-hour service projects that improve the health of vulnerable communities. Some of these Schweitzer Fellows are veterinary students who work to improve companion animal health in underserved areas: http://schweitzerfellowship.wordpress.com/2009/09/08/animals-al-and-amy/

On our blog, we frequently write about Dr. Schweitzer's legacy of compassion towards all living creatures. Check us out at http://schweitzerfellowship.wordpress.com!