The Sea Turtles in Costa Rica Are Victims of Global Warming 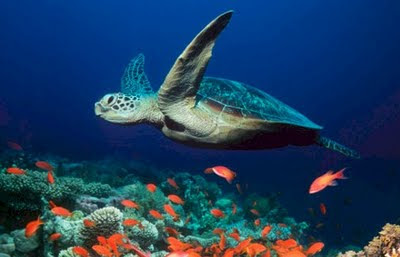 (December 14,2009) Playa Grande, a holiday resort in Costa Rica, has been well-known for its leatherback turtle national park, turtle’s beach and turtle’s museum. That is why Steven Johnson, a Sweden tourist, has very high expectation for this place. He said, “We certainly want to see sea turtle. This is a part of charm of the place.”The disorderly development of cities and increase of temperature and sea level have greatly reduced the number of sea turtle in the Pacific.

In last year, on the beach where there were numberless sea turtles that have made their nests, scientists have observed just 32 leatherback turtles for the whole year. Because leatherback turtle is at the brink of extinction, the sea turtle museum has been abandoned for three years. Now, the museum and around areas have become a sea covered with weeds. And the ticket office for turtle-tour on the beach was washed into the sea in September.

“Because turtle’s amount is too few, we haven’t promoted this place as the destination of turtle-tour anymore”, said the administrator of national park. Even in the decades before scientist found that the temperature was rising slowly, sea turtles were facing many threats like beach construction, fishing nets and people’s capture. But for such creature that have lived in Pacific area for about 150,000,000 years, global warming has become their last straw.

Sea turtles are very sensitive about the side effect caused by climate warming. They look for food on coral reefs which are now dying due to increasingly warm and sour seawater. They cover their eggs with sand on the beach. But the beach was destroyed due to rising sea level and storms.

Besides, the sex of a sea turtle is not determined by gene, but it’s determined by the temperature around the egg when it is hatched. Slight rise in temperature can make all of the hatched turtles become female ones, which is a big problem for the existence of the species.

On the beaches where sea turtle made their nests, scientists can cool these turtle’s eggs only by some artificial ways like setting up tents or watering them. They also tried to make wider beach areas become ones that isn’t for real estate’s development, so that sea turtles can find some places to hatch eggs even after the sea level has risen.

Nowadays, collecting turtle’s egg in Costarica is an illegality, but poaching in some towns is still prevailing. In Playa Junquillal, people have paid more attention to those poaching actions. There, five boys are patrolling on the beach, prevent poachers from stealing turtle’s eggs. These boys’ action has made them become idols of many children. Dr. Francia, who is a biologist, also invited some local families to see the release of sea turtles. He said, “Many people who have eaten turtle’s egg have never seen real sea turtle in their life time.”

Sea turtle is a kind of lovely marine creature. If you want to learn more about sea turtle, you can visit Sea Turtle Protection. On this website, you can learn what measures we can take to save sea turtles. You can even be signed up as a volunteer to protect this endangered animal. The protection area is located in Sanya city, which is China’s southernmost coastal city. If you come here, you can not only see those lovely sea turtle, but also learn Chinese. If we work together, sea turtles will go on surviving on this planet. (Thank you Douglas for this important article. Please visit http://www.articlealley.com/article_1293961_54.html)
Posted by Michelle Buckalew at 12:56 PM

Why did I receive an email this morning with photos of hundreds of locals stealing sackfulls and sackfulls of turtles eggs on a beach in Costa Rica - I don't know what year they were taken but they loo recent. The loss to population on the area will have been devastating. Why was it allowed??

I can't tell you why. Your guess is as good as mine. For further information on the "loss to population on the area will have been devastating" and "Why was it allowed??" please see:

If you have any further information on this matter please let me and others know.

This is a very interesting blog and so i like to visit your blog again and again. Keep it up.

These articles are fantastic; the information you show us is interesting for everybody and is really good written. It’s just great!! Do you want to know something more? Read it...: Great investment opportunity in lots in Costa Rica

It’s great whenever someone asks me about Costa Rica, best vacation hotels, the real estate investment outlook, or the wellness aspects. I enjoy sharing my experiences in making choices when visiting Costa Rica’s southern Pacific Coast.Properties in Samara Costa Rica

I love this blog, is really amazing. The turtles are my favorite animal because they are quiet and they never represent a danger for anybody. This is the main reason why i love it.
buy viagra

Some hostel are stick when it comes of curfew.

So how is the Nike vapor soccer shoes changed? Visually. the new Vapor football boots have undergone the same new paint work as the Nike Mercurial Superfly boots and now feature the updated asymmetric, fluorescent.

uggs clearance On the other hand equally approaches you must make sure that you are obtaining the original footwear and not counterfeit ones. Uggs Outlet The ideal place could be the online where by inside a make a difference of a few seconds it is possible to obtain that which you are searhing for from anywhere within the entire world ugg boots clearance.l