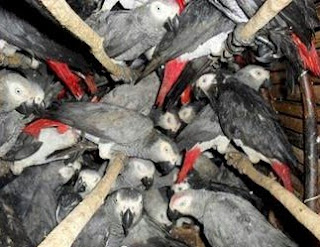 The Pan African Sanctuary Alliance (PASA) and the World Parrot Trust (WPT) today called on international law enforcement agencies to intervene following the Government of the Democratic Republic of Congo’s seizure of over 490 African Grey parrots from a sanctuary with the intention of returning the birds to the original dealer.
PASA and the WPT submitted a brief to the Convention on International Trade in Endangered Species (CITES) and asked that any attempt to ship the parrots out of DR Congo be blocked. Similar briefs were also sent to Interpol, the World Customs Union, and the International Air Transport Association (IATA).PASA also alerted the CITES Management of Singapore – the parrots’ original destination – to the possibility that a large consignment of parrots could be imminent.

“PASA is outraged at the manner in which the Government of the Democratic Republic of Congo has removed these parrots from a PASA member sanctuary,” said Doug Cress, executive director of PASA. “We were given no warning and no cause. We rescue and rehabilitate wildlife to conserve important species – not make them well so that dealers might get rich. We condemn this action, and will do anything we can to keep this shipment from leaving Africa.”

The African Grey parrots were originally confiscated in mid-September by the Congolese wildlife authority (ICCN) and local government officials, and taken to the Lwiro Primate Rehabilitation Center in South Kivu. There, 523 parrots were found crammed into crude wooden crates, and despite the best efforts of Lwiro staff and veterinarians, over 30 of the birds died from injuries and stress.

The WPT worked with PASA and Lwiro to rehabilitate the others, however, and constructed spacious enclosures to speed the recovery process. Earlier this month, over 400 of those original birds were judged fit to be released back into the wild.But the DR Congo’s Ministry of Environment ordered the parrots seized on Nov. 22, and had the birds placed back inside the original travel crates.

The crates were then flown back to Kinshasa and the original dealer. The crates and the manner in which the parrots were shipped are blatant violations of IATA standards, while the original CITES permit that accompanied the parrots listed only 300 – far below the number that were actually in the crates.

"The World Parrot Trust collaborated closely with PASA, Lwiro and a number of key advisors in this most recent parrot rescue, and feel the birds were seized in a manner that is neither legal nor humane as outlined in CITES regulations,” said Dr. James Gilardi, executive director of the WPT.

“We respectfully request that the CITES Secretariat investigate this action by the DR Congo government, and take steps to halt this and future illegal and inhumane consignments of African Grey parrots."African Grey parrots are found throughout Central and West Africa, but have been heavily hunted for the pet trade in recent years.

Experts believe that up to 21 percent of the wild population is captured each year. African Grey parrots are listed as a CITES Appendix II species has been the subject of two recent Significant Trade Review processes.PASA is comprised of 20 member sanctuaries in 12 countries, which rescue and rehabilitate chimpanzees, gorillas, bonobos, drills, and other endangered primates.

Posted by Michelle Buckalew at 8:13 AM