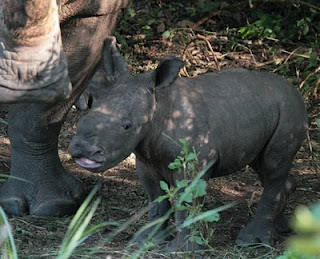 
Uganda has a baby rhino called OBAMA? I run a rhino sanctuary in Uganda which is the home to the only wild rhino in Uganda (please visit our website www.rhinofund.org) where you will get a lot of information and pictures.

Rhino were poached to extinction in Uganda by 1982 and we currently have 6 adult Southern Whites and 3 babies on our sanctuary. All three the babies were born on the sanctuary under totally natural circumstances. Our rhino roam on a 7000ha sanctuary and are protected by rangers 24 hours a day. We are an NGO and rely on funding. And do make a bit of money by offering on foot rhino tracking to tourists which everyone loves.

Obama was our first baby born in Uganda in 28 years and was born on the 24th June 2009. He was named Obama because his mother (Nandi) was donated By Disney Animal Kingdom in the USA (she was born there) and his father came from Kenya. Seeing that, he made the history as he did here in Uganda.

And his and President Obama’s parents coming from the same places, we just had to name him Obama. Of course, we also hoped that the American people would enjoy this story and assist with funding over here (which unfortunately has not happened yet but we are hoping will happen).

So that is the news from this end. All three babies are doing well, and Nandi has mated again with our dominant male Taleo. Taleo is also currently courting the next female Bella. It seems we are in for another baby boom here in 16 months time.

Editor's note: Visit the website to learn how to help this wonderful organization help the rhinos. See other sweet photos of Obama the rhino and his mom at http://www.rhinofund.org/meetrhinos.htm