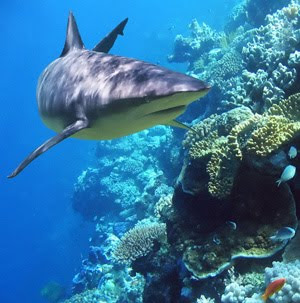 
Every year, the world’s fishermen hack all the fins off of more than 100 million living sharks and dump their dismembered bodies back into the sea, leaving these massive fish to suffer an agonizing death that can take days. Some die from starvation, while others are slowly devoured by various predators, or simply suffocate because they cannot swim and sharks must remain in constant motion to keep oxygenated water flowing through their gills.

The driving force behind this aquatic atrocity is the growing global appetite for shark fin soup, a high-priced delicacy that is most popular in China, Japan and other far-east Asian nations. Shark fins fetch about $200 per pound, while shark meat only sells for less than one-tenth that price.

So it is economically profitable for fishing companies to simply chop sharks’ fins off and throw their mutilated bodies overboard because ships can only fit so much flesh in their refrigerated holds on long journeys out at sea.

The impact of this inhumane practice has been devastating to fragile oceanic ecosystems. Coupled with other slash-and-burn methods like long-line fishing, shark finning has caused a 90 percent decline in worldwide shark populations over the last half century.

And because sharks are the top apex predators of the deep, their dramatic disappearance has led to radically increased numbers of rays and skates, which devour shellfish at an unsustainable rate.

Fortunately, some people are taking effective action to counter the seafood industry’s wave of wanton destruction. When the Goldman Environmental Prize (widely considered the “Nobel” of environmental awards) recently recognized biologist Randall Arauz for his efforts to end shark finning in Costa Rica, the campaign against this abominable animal abuse achieved new levels of international awareness.

His undercover video documentation of a vessel finning 30,000 sharks ultimately led to a ban on the practice in his native country. Formerly the third largest exporter of shark meat, the law Costa Rica passed in 2006 has become a model for countries around the world to follow.

Momentum to prohibit shark finning by the U.S. fishing fleet is proceeding apace here, as well. Congress banned shark finning in 2000, but a loophole allows ships in the Pacific Ocean to bring shark fins to market as long as they weigh less than five percent of sharks’ “dressed” weight (i.e., the carcass minus its head and innards).

In March 2009, the House of Representatives passed a bill to make Pacific fisheries comply with the same rules as those operating in the Atlantic Ocean, Caribbean Sea and Gulf of Mexico. Passage of a Senate companion bill, entitled the Shark Conservation Act (S. 850), is all that’s needed to make it the law of the land (and sea).

What You Can Do
Please urge your two U.S. Senators to support and co-sponsor the Shark Conservation Act.
Also call and write President Obama urging him to aggressively promote an international ban on shark finning, as only 33 of the world’s nearly 200 countries have instituted regulations against the practice.
Posted by Michelle Buckalew at 8:58 AM