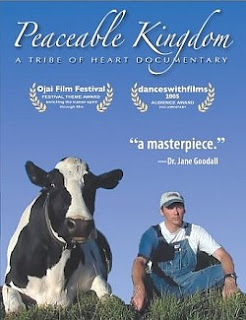 Peaceable Kingdom: The Journey Home is a new documentary by the award-winning filmmakers of The Witness. A story of transformation and healing, this groundbreaking new film explores the awakening conscience of several people who grew up in traditional farming culture and who have now come to question the basic premises of their inherited way of life.

Presented through a tapestry of memories, music, and riveting accounts of life-altering moments, the film provides insight into the farmers' sometimes amazing connections with the animals under their care, while also making clear the complex web of social, psychological and economic forces that have led them to their dilemma.
Interwoven with the farmers' stories is the dramatic animal rescue work of a newly-trained humane police officer whose sense of justice puts her at odds with the law she is charged to uphold.